Book Appointment
Home 9 Cosmetic Dentistry 9 Alternative to Braces: Invisalign or Invisible Braces
Let’s be honest. As much as it’s necessary to have braces to align your teeth, they are uncomfortable and ugly! But no more. If you are looking for an alternative to braces, read on.

Invisalign (or invisible braces), is a great alternative to traditional braces. It used to be the case that Invisalign could only fix specific types of cases/patients but that has changed. Almost all cases of teeth-straightening can now be fixed successfully using this technology.

Invisalign is much more hygienic than traditional braces since trays can be/are removed for eating/drinking and of course brushing/flossing. They are, of course, aesthetically much more pleasant than regular braces since most often one can’t even tell that they’re being worn until they come real close to your face!

There are no brackets in Invisalign; in fact, teeth movement is achieved with using clear trays that are manufactured based on computer simulation of the expected teeth movement. You can certainly view the simulation with your dentist once the moulds have been sent to Invisalign, and see how long the suggested treatment would take. Every tray is worn for 2 weeks typically at which point you’d move on to the next one. There are small buttons that are placed on the teeth with tooth-colored filling that help with creating traction for the trays; of course they are removed after completion of the treatment. 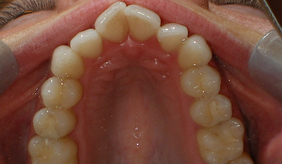 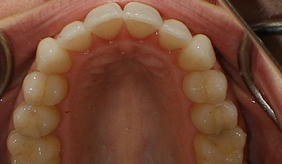 If you want to expedite your treatment, you could ask your dentist about accelerated treatment options, using either AcceleDent or Propel technology, which could cut the treatment by up to half (we will have a separate post on this subject). This would mean that every tray would be worn for about 7-10 days, depending on bone remodeling of the individual and the severity of the case.

The only catch with Invisalign is persistence in that it is up to you to wear the trays 18-20 hours per day – you’d sleep in them which is great for those who clench/grind actually as this would work as a guard in a sense.

In summary, you don’t have to go through the inconvenience and unpleasantness of braces. If you were considering braces, you are most likely a great candidate for Invisalign too (there are only a very few cases that cannot do Invisalign and still have to do braces but that’s rare). If you have any questions on Invisalign or if you’d like to get an initial consult contact us at Soothing Dental San Francisco.